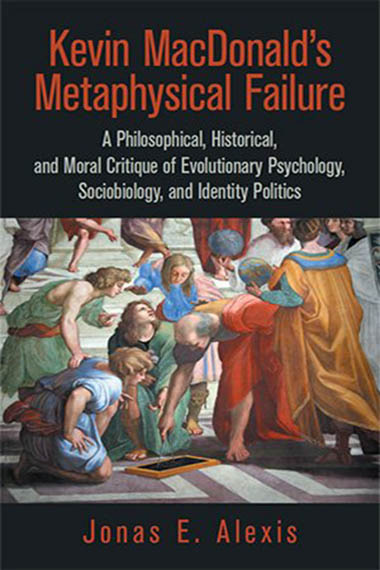 In Kevin MacDonald’s Metaphysical Failure, Jonas E. Alexis offers a thoroughly researched, nuanced and lucid analysis of Kevin MacDonald’s thought, in particular MacDonald’s belief in biological and philosophical Darwinism. It is an important book that fills a critical gap in the literature on the history of revolutionary movements and Darwinism both in the West and in Asia. It is also a study that adds many significant strands to the densely interwoven history of ideas such as Malthusianism and Eugenics. Alexis’s book engages debates in the history of ideas-going back to Madison Grant and beyond-and the history of Darwinism. It challenges many of the life-long prevailing assumptions about identity politics and produces a powerful critique of how “scientific” theories have been misused to uphold misguided and faulty categorizations. Powerfully reasoned, and backed with a startling array of documented studies, Kevin MacDonald’s Metaphysical Failure presents an in-depth look at key beliefs behind many mistaken and consequently destructive actions taken by numerous writers and thinkers, particularly Darwin’s ardent enthusiasts and devoted disciples. The book presents eye-opening insights into the historical development of Darwin’s ideological project and how that project ended up crippling Darwin’s intellectual children-from Richard Dawkins, Francis Crick, James Watson, Daniel Dennett, Ernst Mayr, and E. O. Wilson to Kevin MacDonald, Richard Spencer, David Duke, and Jared Taylor.