The United Earth Sphere Alliance is a powerful military organization that has ruled over Earth and space colonies with an iron fist for several decades. When the colonies proclaimed their opposition to this, their leader was assassinated. Now, in the year After Colony 195, bitter colonial rebels have launched “Operation Meteor,” sending five powerful mobile suits to Earth for vengeance. Built out of virtually indestructible material called Gundanium Alloy, these “Gundams” begin an assault against the Alliance and its sub organization OZ.

END_OF_DOCUMENT_TOKEN_TO_BE_REPLACED

Victory in the 2nd Robotech War will be decided, not by superior strength, but rather by a willingness to make the ultimate sacrifice. Once the secrets of protoculture are revealed, the tough decisions that must be made, on both sides, will ultimately determine the fate of two civilizations. The manner in which the various characters choose to accept their fate forms a dramatic backdrop to the powerful conclusion of the second act of the epic, multi-generational Robotech Saga.

END_OF_DOCUMENT_TOKEN_TO_BE_REPLACED

Federation troops and Zeon forces carry out a fierce battle in the Thunderbolt Sector in what was once Side 4 “Moore.” The Thunderbolt Sector is a shoal zone composed of the debris of destroyed space colonies, named for the electrical discharges from the metal debris. MS pilot Io Flemming is among the Federation soldiers who are dispatched to the area, where Zeon sniper Daryl Lorenz awaits them on the battlefield.

END_OF_DOCUMENT_TOKEN_TO_BE_REPLACED 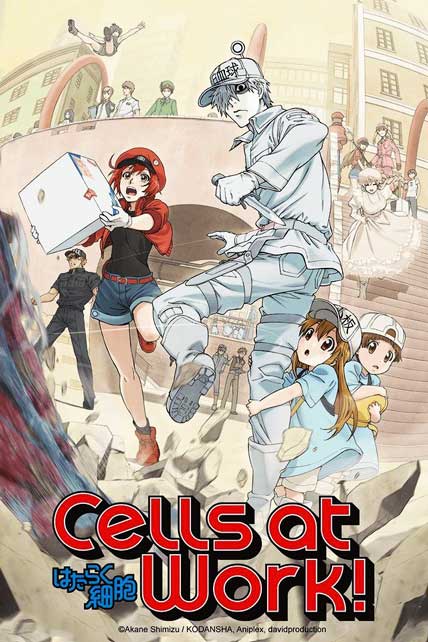 The human body consists of approximately 37 trillion cells. These cells are hard at work every day within a world that is your body. From the oxygen carrying Red Blood Cells to the bacteria fighting White Blood Cells, Get to know the unsung heroes and the drama that unfolds inside of you.

END_OF_DOCUMENT_TOKEN_TO_BE_REPLACED

Highschool of the Dead The Complete Series 720p BDRip H264

A mysterious, lethal disease is on the loose worldwide, resulting in a catastrophic death rate of humanity, and the increasing rise of attacks, caused by the living dead. In Japan, several high school students and a school nurse have banded together to escape Fujimi High School shortly after it was attacked by zombies. The group now attempts to figure who or what was responsible for this plague, and in the meantime, attempt to survive the present apocalypse. The story is initially narrated through the eyes of Takashi Komuro, one of the students who had survived in the initial outbreak.

END_OF_DOCUMENT_TOKEN_TO_BE_REPLACED

Humanity is under attack by human-mimicking flesh-eating alien parasites. One parasite bonds with his young high school student host, and he convinces the parasite to help him stop the others.

END_OF_DOCUMENT_TOKEN_TO_BE_REPLACED

The humanity is suffering from murders all over the globe, called “Mincemeat murders”. High school student, Izumi Shinichi has a parasite living off him, having replaced his right hand, and he might be the discoverer of truth.

END_OF_DOCUMENT_TOKEN_TO_BE_REPLACED

Inspired by her grandfather’s stories, young Shinko embarks on wild flights of fancy about the history of the little town she lives in. But dreams can’t fend off the realities of growing up.

END_OF_DOCUMENT_TOKEN_TO_BE_REPLACED

From Up On Poppy Hill was the top-grossing Japanese film of 2011, earning over $56 million at the Japanese box office and winning the Japan Academy Prize for Animation in 2012. The film was directed by Goro Miyazaki from a screenplay by Hayao Miyazaki, marking the first feature collaboration between father and son. An English-language version is being produced by Studio Ghibli with Kathleen Kennedy and Frank Marshall executive producing.

Set in Yokohama in 1963, the film centers on a high school couple’s innocent love and the secrets surrounding their births. The story takes place in a Japan that is picking itself up from the devastation of World War II and preparing to host the 1964 Olympics – and the mood is one of both optimism and conflict as the new generation struggles to embrace modernity and throw off the shackles of a troubled past. The film’s rich color palette and painterly detail capture the beauty of Yokohama’s harbor and its lush surrounding hillsides, while the 1960’s pop soundtrack evokes nostalgia for an era of innocence and hope.

END_OF_DOCUMENT_TOKEN_TO_BE_REPLACED

Year 2116-The Japanese government begins to export the Sibyl System unmanned drone robots to troubled countries, and the system spreads throughout the world. A state in the midst of a civil war, SEAUn (the South East Asia Union), brings in the Sibyl System as an experiment. Under the new system, the coastal town of Shambala Float achieves temporary peace and safety. But then SEAUn sends terrorists to Japan. They slip through the Sibyl System and then attack from within. The shadow of a certain man falls on this incident. In charge of the police, Tsunemori travels to Shambala Float to investigate. The truth of justice on this new ground will become clear.

END_OF_DOCUMENT_TOKEN_TO_BE_REPLACED

The story of the high school students Mikako Nagamine and Noboru Terao. When the alien Tarsians attack, Mikako volunteers to be a pilot in the space force that will protect mankind. The lovers try to remain in contact using cellular telephone text messages, but as each battle takes Mikako further from the Earth, each message takes longer to arrive. Will their love stand the tests of time and distance?

END_OF_DOCUMENT_TOKEN_TO_BE_REPLACED

Set in a slightly futuristic world where Earth has been invaded and is at war with aliens from another dimension called the Nova, the story follows the adventures of a Japanese boy named Kazuya Aoi who enrolls for training at a special school for genetically modified girls called Pandoras who battle the aliens, and their male partners, called Limiters, who use a special power called “freezing” to limit their opponent’s mobility. The protagonist makes the acquaintance of an unusual older girl named Bridgette L. Satellizer who appears to be the most powerful Pandora in her class, but has not yet chosen a male partner to be her Limiter, and in spite of the warnings of all his friends, he decides to be her Limiter.