Jasmonates and Brassinosteroids in Plants Metabolism Signaling and Biotechnological Applications 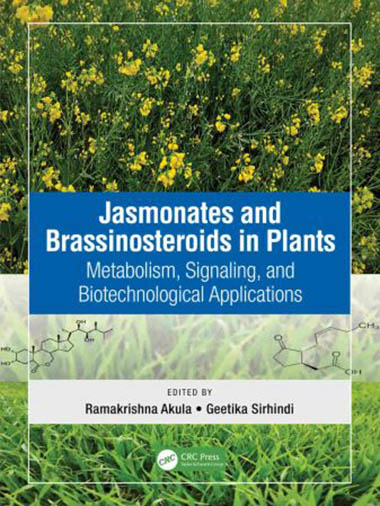 This book provides a comprehensive update on recent developments of Jasmonates (JAs) and Brassinosteroids (BRs) in plant signalling and biotechnological applications. Over the last few decades, an enormous amount of research data has been generated on these two signalling molecules. This valuable compilation will enhance the basic understanding of JAs and BRs mechanism of actions ensuing tolerance mechanism of crops under climate changes for sustainable agriculture and human welfare. This book covers topics regarding the occurrence of JAs and BRs in plants, biosynthesis, role in plant growth and development, role of these PGRs during various abiotic stress tolerance in plants, crosstalk of Reactive Oxygen Species (ROS) and plant stress mitigation, regulation of JAs and BRs signaling pathways by microRNA, along with physiological and anatomical roles of JAs and BRs as wound healing, regeneration and cell fate decisions. The cross talk of JAs and BRs with neurotransmitters in plant growth and development. Bio-fortification of crop plants with BRs in managing in human health issues chapter enlightened new role of BRs in human wellbeing.

This book will be beneficial to scientists, researchers, agriculturists, horticulturists, industries related to the crop and food production

Reviews the global scientific literature and experimental data of the authors on the occurrence of JAs and BRs in various plants
Update information on recent developments of JAs and BRs signalling and biotechnological applications in plants
Highlights the physiological, metabolic and molecular mechanism of JAs and BRs under variable climates
Addresses the abiotic and biotic tolerance management by JAs and BRs
Describes the role of JAs and BRs in sustainable agriculture and human welfare in eco-friendly manner