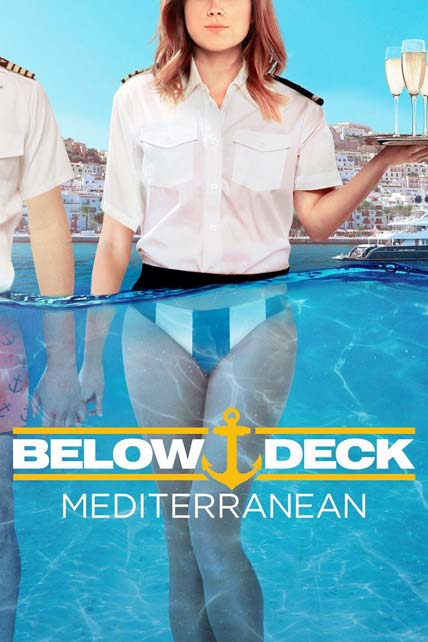 With a new boat, new location, and new faces, the excitement, drama, and adventure of life aboard a private luxury yacht is taken to another level in the Mediterranean. Providing unparalleled service to wealthy and uncompromising guests is made even more difficult as the team faces everything from love triangles to seeing fellow crew members shockingly cross the line with guests. Voyaging from Santorini, Mykonos, and many of the Greek islands, each episode features a new group of elite clientele who present a new set of challenges, all while offering the crew a glamorous lifestyle and exotic perks that most people only dream of experiencing. For these young, attractive, and adventurous yachties, the “work hard, play harder” nature of the job combined with the pressure of working in the most exclusive yachting scene in the world pushes the team close to the breaking point on Below Deck Mediterranean.

Season 5, Episode 01 – “I Like Big Boats & I Cannot Lie”
Malia returns as Capt. Sandy’s first female bosun, a role she hopes to grow into while commanding respect from her all-male deck team; Brazilian chef Kiko tries to make a good first impression; Hannah is challenged by an experienced Second Stew.

Season 5, Episode 02 – “Cant Touch This”
boiling point when Lara refuses to take direction from Hannah. In the galley, Kiko finds himself up against guests that are less than satisfied. Malia deals with a green deck crew and is forced to draw the line with Pete.

Season 5, Episode 03 – “The Italians Job”
Romance is in bloom on the crew’s first night out of the season, as Pete makes his move while Rob and Jess find themselves connecting on a deeper level. The second charter kicks off when guests with ties to the music industry arrive, but unforeseen circumstances immediately put the Wellington crew behind the eight ball. Meanwhile, Pete’s attitude forces Malia into a difficult confrontation, and tensions between Hannah and Lara take a surprising new turn.

Season 5, Episode 04 – “ACE OF STEW FACE”
With bad weather rolling in and down her Second Stew, Hannah scrambles to manage the interior with only Jess to rely on. Captain Sandy and Malia draw a hard line with the deck team when they call the guys out for their questionable behavior. Kiko struggles to prepare a picnic lunch for the first off-boat excursion of the season. After surviving the charter, Hannah is rewarded with a Second Stew, but she quickly realizes the newest addition to her team may be more than she bargained for.

Season 5, Episode 05 – “Bringing the Thunder”
Providing unparalleled service to wealthy and uncompromising guests is made even more difficult as the team faces everything from love triangles to seeing fellow crew members shockingly cross the line with guests.

Season 5, Episode 06 – “Oh.Snap”
Kiko faces his biggest challenge yet when demanding charter guests invite friends to join a 6-course dinner. Hannah confronts Bugsy about their past, while Rob and Jess find their budding relationship threatened by a new revelation. Meanwhile, an unexpected injury threatens to upend the rest of the charter season.

Thank you SO SO much, you are getting closer to being THE best, keep it up, HAHAHAHA.

Stay safe my friend, and keep your friends and family safe too.